Super Appliance Service and parts, We repair your appliance in amarillo, We sell appliance parts 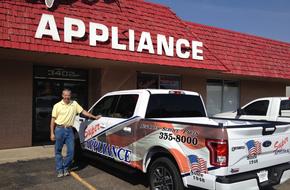 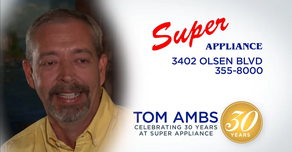 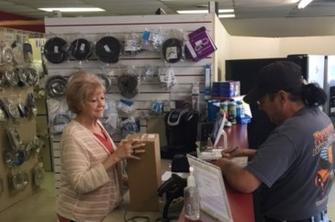 We’re committed to serving you with quality appliance Service. Our first-time customers continually become our long term customers time and time again, choosing us for all their appliance needs. Call us today, and see what our commitment to quality is all about! We may not be related, but you’ll feel like we’re family.

Morris G Lamb was born in Jericho, Texas ten miles east of Groom in 1919.  He was raised on a farm by parents who instilled Christian Values and hard work ethics.

In 1941, he joined the Sea Bees, a division of the U. S. Navy.  While in Detroit, Michigan, he met Monica Seibert, who was also raised in a Christian home.  After years of letter writing, they were married in Clarendon, Texas in 1944.

After WWII, they moved from Detroit to Amarillo and in 1948, together started Super Refrigeration in a small one car garage behind their home at 4005 Harrison.  Because Morris and Monica were reared in homes based on Christian values, it was only natural that the business they started was based on Christian principles.

In 1952, a larger building was moved in to replace the old single car garage.  Business was good enough to hire the company’s first employee, Jack Barnett.  Morris and Jack would make $.00 service calls all day and do shop work at night.  Meanwhile, Monica was secretary, accountant, homemaker, and by 1957 mother to four.

By 1962, Super Appliance outgrew its garage behind the family home and a building at 421 W 4th was rented.  Employees were added and God continues to bless.

Another move a few doors down was made in 1965 to a larger building at 413 West 4th, next to the Central Fire Station.

During 1984, Morris and eldest son purchased entire quarter block.  They remodeled the downtown property the Housed Super Appliance.  Because of God’s blessings, Super Appliance was then the largest independent servicer from Dallas to Denver.

In 1985, Grant and wife, Carol purchased the family business.  Even though recession was at its worse, God continued to bless.

By December of 1989, the retail parts division was expanded to include a new second location at 2414 Paramount.  This was the first venture into selling new appliances.

December 1991, both locations were consolidated into one newer, larger location at 2518 Paramount.

After 69 years, God continues to bless this “little family business” started in a one car garage in 1948.

We have one of the largest parts department in the Texas Panhandle..  We carry fast-moving parts for all major brands of appliances.  Slow moving and Hard to find parts we can often  get next day..

Thresha will work hard  to get you the part you need as quickly as possible.

Tom Ambs, our Senior Technican, has worked for Super since he was 17 years old. He is  friendly, knowledgeable, courteous and professional.  He has the knowledge to repair your appliance..

What people say about Tom:

We have used Super Appliance for many years. Tom has been out to fix our Refrigerator last year and today was back to repair my washer. I cannot say enough about how I appreciate the professionalism and competency shown to me. I have always had fast, honest and fair work completed. I would never think of using anyone else to help with my appliances and although you never want them to wear out or break down I rest easier knowing Super Appliance and Tom are there for me.
Thank You

Reviews
​
Bette S 2017
Its nice to have a company I can trust , and stands behind their work Tom is a very nice service man!


Tim R 2017
You have a great service Tech. He was very professional and helpful. He went out of his way to not only make my necessary repair but also explain to me what he needed to do. The repair was make quick as well. I would highly recommend you and your team.


Stephanie R. 2017
Tom is a great technician. He fixed my refrigerator a couple of years ago and now my washing machine. He arrives on time and he is very careful when working around your home. He didn't mind my curious puppy hanging around either.
via Yelp

rea 2017
Replacing the burnt-out bottom element of the Whirlpool oven I installed in 1999,was a piece of cake four the knowledgeable people at Super Appliance. They quickly found, in their inventory, the replacement I needed...and at a good price.
Richard E. Adams

7105tim 2017
I needed a belt for one of my dryers in my business. I was told that Super Appliance would have what we needed or they could get it fairly quick. I went there and the part was in stock and they also gave me a paper on how the part would …
read more
via Google

buzzy572 2017
Washer was fixed within 2 hours of calling. And on a Friday afternoon.
via Google

Arron Hobbs 2015
Best service company in the area! Prompt, curtious service, friendly and knowledgeable servicemen get ya fixed up with a smile, and in a hurry!!! Your reliable choice when it comes to any and all of your appliance needs. I always call them
via Google

None Of Y. 2012
I have called this company twice now. The first time was three years ago when our washer broke. The second was yesterday when the other company I called to fix our dryer ended up being awful. I am so please with super appliances service and…
via Yelp

Our team is highly skilled and has years of experience. Most of all: they care about you.
View on Mobile
Appliance repair, appliance parts, appliance sales, new, used appliances